It was an auspiciously sunny morning as we parked among yachts in various states of repair, a clue to our proximity to Chichester Harbour. With our guide, Hilly Sloan, our focus was to be Bosham Church and its place in history. Its name is a clue, deriving from ‘Boscum’ - oak essential for shipbuilding.

Bosham, a Royal Manor from Saxon times, played a significant role in English history featuring in the Bayeaux Tapestry. The Royal connections meant that Bosham Church had a College of Priests whose interests clashed with those of the parish. The Church itself dates back to Saxon times but has been extended eastwards.

The remoteness of Bosham meant that smuggling was rife and we saw gravestones that could be removed to hide contraband from the Revenue men. Although Bosham had proved an unsuccessful startup site for a conquest of Normandy, matters were more auspicious in the 2nd World War when Bosham was a base for early radio transmissions to France and its ship building facilities were used to build and test the ‘Mulberry Harbours’ used in the D Day landings. 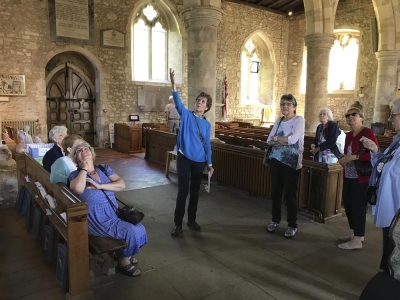 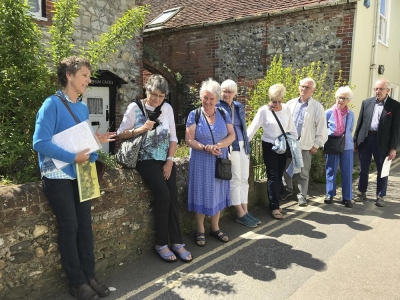