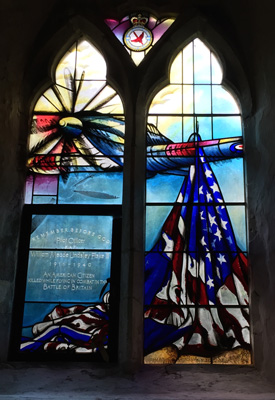 Despite requests to Henry VIII for discretion, Boxgrove Priory was dissolved in 1536. Part of the monastic church was retained as the parish church, which is still in use today, whilst the rest of the monastic buildings were demolished or damaged to prevent further use. Fortunately the splendid 16th century painted ceiling, by Lambert Barnard and commissioned by Thomas West, 9th Lord de la Warr, Lord of the Manor of Halnaker was left untouched as was the chantry chapel, which he planned to serve as a tomb for himself. The tomb is actually empty as Lord de la Warr was forced to leave the Halnaker estate in 1540.

Our visit coincided with the 75th anniversary of the Battle of Britain and its location close to Tangmere and Goodwood meant that the church suffered bomb damage to the windows during this period. More poignantly, within the churchyard is the grave of Pilot Officer Billy Fiske, an American who flew with 601 Squadron. He died on the 17th August 1940 from injuries received in battle. As one of the first Americans to die in the Second World War he is commemorated on a beautiful stained glass window, on the southern wall of the church. This lovely memorial was installed in 2008 displaying a Hawker Hurricane along with the Stars and Stripes.