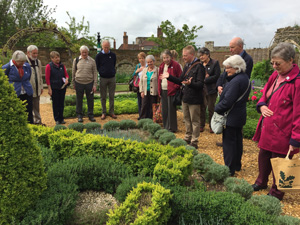 The visit began in the delightful knot garden which gave us the opportunity to view the external features before entering the house where various forms of construction including brick, wattle and daub walls could be seen before descending into the wine cellar, which had been used as an air raid shelter in the second world war.

Moving up through the rooms of the house, we learnt that in the 1600s the house was owned by wool and cloth merchants. It is likely that it was also used as a boarding house for seamen whose maritime graffiti is still visible on some of the walls.

Significant alterations, including a Georgian wing, were added in the 18th century. By the 19th century this part of the city became very rundown and disease-ridden and the whole area, including Tudor House was due for demolition. Philanthropist William Spranger recognised its importance and in 1886 bought the house, hoping to turn it into a museum, which finally opened in 1912.