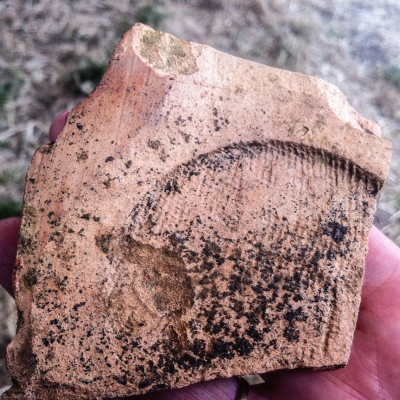 In July we made our second visit to the Silchester Town Life Project in this, the final year of an 18 year project. Organised for us by Lyn Pease, we were guided around the site by the dig director, Amanda Clarke. The tour commenced at Insula IX, which has been the major centre of their work. Located at the cross roads of the north/south and east/west Roman roads, the project has three main purposes

It was excavated originally by the Victorians at the end of the 19th Century, who used their typical method of ‘wall chasing’. Regrettably they did not recognise the timber buildings crammed between the stone buildings in the town.

By removing archeology layer by layer and reading the colours and textures of the soil, the current excavation has revealed the Iron Age town of Calleva Atrebatum (the town in the wood of the Atrebatum tribe) built between 40BC and 40AD. Whilst the later Roman town was built on a north/south, east/west road grid, the Iron Age settlement had roads running diagonally north east/south west, north west/south east, a system which seems to have been maintained for some time after the Romans arrived.

The original boundary ditch for the town has been uncovered but expansion of the settlement led to a large wooden hall being built over the ditch between 20 and 10BC. We could clearly see by the location of post holes that the building measured 8 metres by 50 metres, which makes it the largest Iron Age timber building exposed in the UK.

The location of many other buildings have also been uncovered together with an abundance of wells, which were essential due to the lack of water available at Calleva. We were able to see the current excavation of the oldest well on the site, which is below water table and adjacent to another smaller well.

The decision was taken last year to excavate the nearby Insula III to examine the remains of what the Victorian excavators tentatively interpreted as a bath house. Due to time limitation the approach has been different to that used in Insula IX.

After removing the ploughed soil to identify the location of the Victorian trenches, they were able to see what had been found and make written records of the remains. What is already clear is that the wall foundations marked on the Victorian plan belonged to very different periods and to date there is no sign of any remains that could be interpreted as a bath house. The latest tentative ideas are that it was a large building, which could have been a palace. This was reinforced by the exciting find of a Nero tile on the day that we visited the site. It is believed that Nero personally paid for the building and imposed his mark on it. Only 3 tiles, including this one have been found at Silchester and none have ever been found at another Roman site.

Another exciting find last year was the remains of a simple hearth made up of roofing tiles, which is likely to be post Roman, indicated by the discovery of sherds of a distinctive type of pottery dated between 5th and 8th Century, suggesting evidence of continued occupation in the heart of the town after the Roman withdrawal from Britain in 410 AD.