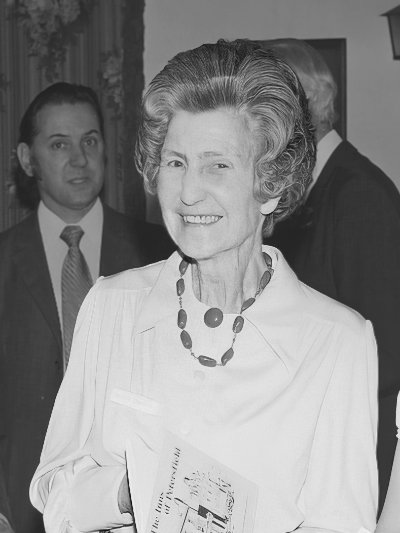 Dorothy Grainger was an historian. She taught it both at secondary school level and, on her retirement, as a lecturer for WEA. It was the enthusiastic response to her lectures on local history held at Petersfield Community Centre that she became the prime mover in the formation of Petersfield Area Historical Society in 1973.

Dorothy was our founder chairman and president, setting our society a high standard for local history research. To achieve this she set up sub groups such as the Parish Register Group, initially leading them herself and then getting others to take over when they were established. Much of the work from these sub groups is now held within the archives of Petersfield Museum.

Another of the other groups she set up was to research the origins of local street names resulting in the society’s first publication in 1976, Petersfield Place Names. She was also involved in two other publications, Inns of Petersfield (1977) and High Street Petersfield (1984).

With her husband Edward, many expeditions and weekends were organised, which were always well researched and very happy occasions. Dorothy, who died in 1987, is remembered as a loveable personality with tireless energy and her legacy is that nearly half a century later, our society is still thriving with members producing well researched articles and publications.